Menu
Log in
Register
Navigation
Install the app
More options
Close Menu
Facebook youtube Discord RSS
You are using an out of date browser. It may not display this or other websites correctly.
You should upgrade or use an alternative browser.

Status
Not open for further replies.

I don't know how I came across it, but I found out about a kickstart campaign for "The Invitation". Seriously, check it out.
I also joined up on their discord channel. (I had to join discord to do this.) Here is proof that I'm a backer: 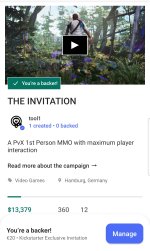 Roughly $22 will get you a key whenever they come out in alpha. I was intrigued, so that is what I pledged. I dont know if they will get the full amount they are trying to get through Kickstart, but they will still give a key to all backers (whenever it comes out). Check it out and, if intrigued, become a backer!

Here's the link to it on Kickstart:

THE INVITATION is a PvX MMO shooter maximizing player interaction. It’s a game about the joy of adventure, tough decision making and harsh consequences.

Quests come from you, the environment and other players, frequently giving you new impulses, ideas and goals.

You find yourself in the rundown countryside of Europe in 2081. Since an advanced alien civilization connected humanity to an interstellar transport network, mankind localises in metropolises and enjoys the benefits of the changes after the Invitation.

The few people still living in the outlands are dedicated to uncovering old human technology and maintain it. Aliens browse these areas. Groups fight for control of essential spots to profit from weapon factories or data centers. Individuals fight for loot and their lives.

Oh this looks pretty freaking sweet, kind of like the game Ark.

Startup your business with WordPress​

Status
Not open for further replies.